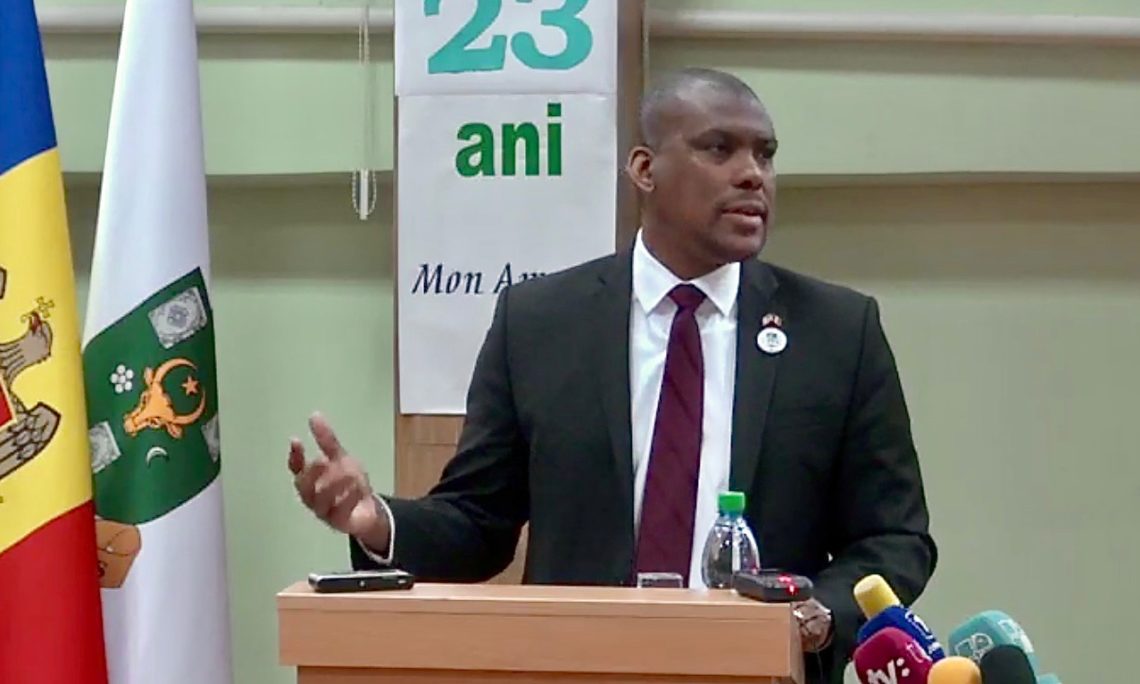 And the next crucial test is already underway: on February 24, Moldovans will vote in parliamentary elections; a critical moment in your country’s democratic development.  As I have met with your leaders across the country, I have been very clear that the United States calls on the Moldovan authorities at all levels to ensure an electoral process that is free, fair, and transparent; where all candidates can compete on a level playing field without fear of harassment or intimidation; and above all, that the will of the people is respected in the outcome.

We understand that elections and transitions of power are always difficult, especially for young democracies.  I know there are questions, even doubts, about its progress, past choices, and future prospects. But any missteps should never be used to shield or excuse a further erosion of Moldova’s fragile democracy.  For the last 27 years, Moldova’s different governments have overseen largely democratic national elections. This is no time for a step backwards.

Now, from our own experience, Americans know that democracy is often messy.  Even after more than two hundred years, the United States still faces challenges – a constant reminder that democracy is an evolving, active process that depends on the broad participation and commitment of its citizens, a robust civil society, objective public voices and honest leaders to help ensure this trust and participation is reflected in informed choices – and produces results.

It is only natural that in this still relatively young country, Moldovans have struggled to reach consensus on questions of national identity, direction and purpose.  As enshrined in your declaration of independence, these are questions for the Moldovan people alone to decide. And healthy, transparent and informed civil debate and democratic processes are the only path to meaningful discussion and decisions that reflect your voice in this country’s future.  That is why it is so important for the Moldovan people to go to the polls on February 24 – to act on the faith that your voices are the only ones that matter in determining Moldova’s future.

Regardless of who wins these elections, we will continue to support Moldova’s sovereign right to choose its own path – but we believe that stronger ties with the United States and Europe strengthen prospects for that future to be brighter and more prosperous.  Towards that end, we will continue to support Moldova’s economic development through stronger commercial and investment ties with the United States. We will support Moldova’s sovereign right to seek out new trade and investment partners in the region to stimulate economic growth at home.  And we stand with you in promoting strong, independent democratic institutions and a judiciary that uphold the rule of law and reject corruption and graft.

We are prepared to continue to partner with Moldova to develop the capacities to defend its sovereignty and safeguard its internationally recognized borders.  We offer diplomatic and technical support to help Moldova diversify energy routes and sources that will lead to lower prices and improved resilience against those who would use energy to undermine your nation’s sovereignty.

At this crossroads in Moldova’s history, reflect on how far you have come.  Less than 30 years ago, people were astonished when Moldovans crossed the Prut, even if only for a few hours, to visit friends and family on the flower bridge.  Just twenty-seven years ago, Moldovans boldly rejected external control and oppression, choosing instead the path to liberty and democracy.  And every day since then, Moldovans have fought tirelessly to realize the dream of a European future.  And although sometimes it is hard to see or recognize, there has been real progress.

Today Moldova is linked to the United States and Europe like never before, through trade, roads, energy infrastructure, and people-to-people ties.  Moldovans who once dreamed of crossing the Prut are now free to travel visa-free all over Europe.  Farmers and businesses who once feared embargoes are now competing in markets across Western Europe and the world.  Despite these strides, there is much work to be done.  And the United States wants to continue working with the Moldovan people to help you continue along the path to greater prosperity, freedom, and a better future.

Since I arrived in October, I have had the distinct pleasure of visiting many parts of this beautiful country – and I have found that far more unites the Moldovan people than divides them.  Still, we all recognize that some foreign actors and even some politicians here at home prefer to focus on the divisions in Moldovan society, seeking to use ethnic, linguistic, and geopolitical tensions to divide you and distract from the real issues facing Moldova.  That is not the Moldova I have seen. Everywhere I have traveled, I have met warm, welcoming people who are working hard to secure a better future for themselves and their families. Moldovans across the country have told me of the common challenges they face with poor roads and insufficient street lights, lack of sanitation and potable water, under-funded or inaccessible schools, and mass emigration that is separating families and draining Moldova’s precious human capital.

The United States has been one of the Moldovan people’s most supportive partners, providing nearly $1.5 billion in assistance in projects across the country since independence.  I am so proud every time I see the road signs thanking the American people and the Millennium Challenge Corporation for building the beautiful road to Soroca. Yes, our help has already changed countless lives for the better, and we will continue to work with you in facing present challenges and in the struggle to secure a prosperous future.

But we recognize that international support will never be enough on its own.  At the end of the day, the real hard work is be up to all of you. Mihai Eminescu’s words ring as true today as they did more than a hundred years ago: “Fără îndoială există talente individuale, dar ele trebuie să intre cu rădăcinile în pământul şi modul de-a fi al poporului lor, pentru a produce ceva permanent.”  Moldovan hands have already built much to be proud of. Now, another critical moment for the nation has arrived; Moldovans must once again take hold of their future with their own hands to choose a bright, prosperous, and democratic path – one where Moldovans now abroad will one day return home to work beside you – to secure a common future for the generations to come.