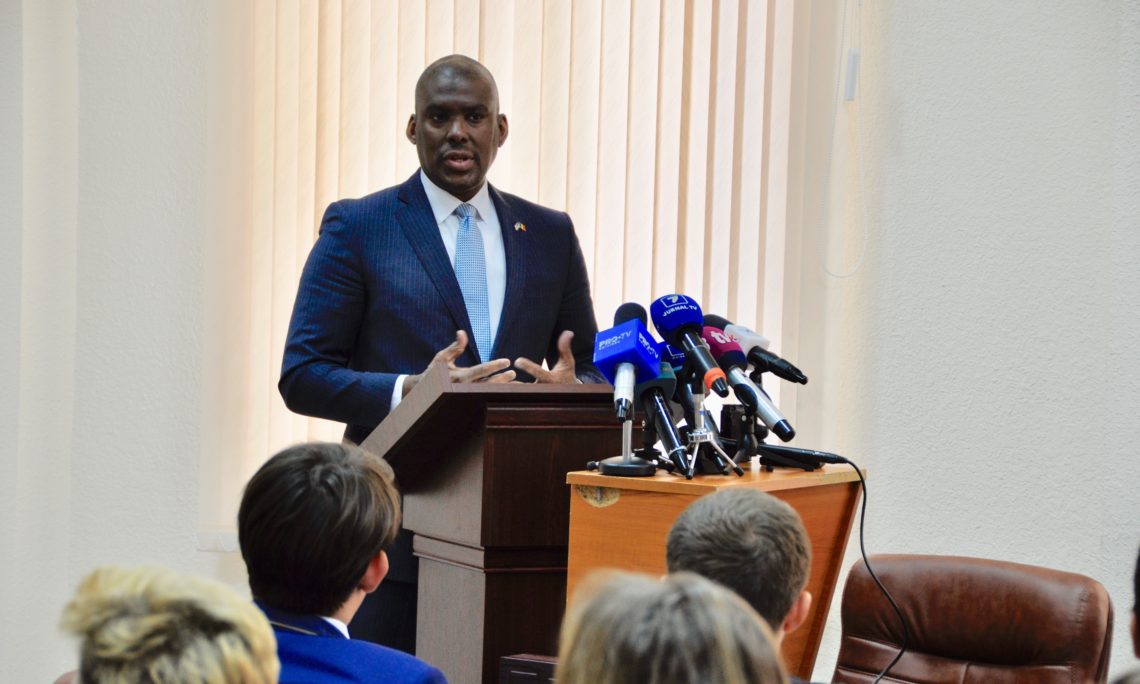 Thank you for inviting me to speak here today to all of you, the future leaders of the legal profession in Moldova. Dear representatives of the mass-media, we highly appreciate your presence here. Today, I would like to discuss with you about the importance and urgency of legal system reforms in the Republic of Moldova.

An impartial, professional legal system is the foundation of democratic societies, and skilled legal professionals play a central role in protecting citizen rights, enforcing the law, and drafting legislation. Some of you will join the next generation of Moldova’s judiciary and Prosecution Service. Others will become lawyers in private practice, work for government agencies, or perhaps even in civil society or for international organizations.

This is an exciting time for you and your colleagues. In June, change swept the country, and Moldova’s leaders set aside disagreement and division to chart a new course for the Moldovan people. This included a shared public commitment to combat corruption in all its forms, eliminate political interests from the justice system, and to build truly independent, democratic and accountable institutions grounded in the rule of law.

The United States has supported Moldova’s efforts to achieve these important goals. We believe that, with the necessary support in Parliament, Prime Minister Sandu’s reform agenda can curb corruption, spur economic growth, and build a brighter and more prosperous future for the Moldovan people. But this cannot happen overnight or without broad public, political and international support.

The international community is prepared to do our part. To help ensure the success of these new initiatives, the United States is increasing our assistance to the Moldovan justice sector and corruption fighting institutions; the EU has resumed its budgetary support, and the IMF is poised to restart its program this fall. Now Moldova’s leaders must do their part to ensure this assistance is put to work for the Moldovan people.

Now, expectations for this coalition are very high. We all need to keep in mind the coalition is only three months in existence, the parties making up the coalition are still learning to work together, and the challenges facing this coalition would be daunting for any political force. That said, the coalition leaders have recognized a number of missteps have been made, including in the appointment process for the new Constitutional Court members.

We all know that such a fundamental shift is not easy. We understand that meaningful reform takes time. But there are steps that can and must be taken now. To start with, Moldova desperately needs a truly independent prosecutor general to pave the way. The draft law, proposed by the government in consultation with the public and the ruling coalition, aims to curb political influence over the selection of this key position, and expand the field of qualified applicants. As we all know, appointing an independent Prosecutor General is only the first step in broader, long overdue justice sector reform. Also, he will pave the way for the investigation, prosecution and holding accountable those who have broken the law, regardless of wealth or position.

The United States supports the government’s efforts to reform other institutions,  including Moldova’s Supreme Court, Supreme Judicial Council and Supreme Council of Prosecutors, including the independent vetting of judges and prosecutors. The judiciary is no place for people with questionable integrity, unexplained wealth, political entanglements, or flawed professional ethics. Moldovan citizens – and speaking of foreign investors who ponder the possibility to invest on the Moldovan market – need a truly impartial legal system that treats all citizens fairly and equally under the law.

I know that with all Moldova has been through, justice sector reform can seem like an impossible task. But I have faith in your ability, in the power given to all citizens who chose to use it, in Moldova’s incredible potential. You deserve a judicial system that is there to serve and protect you.

The United States stands behind the Moldovan people and all who support real reform at this critical moment – we support the reformers who are ready to set aside petty differences and get to work. This will not be easy, but I promise that the end goal is worth it.