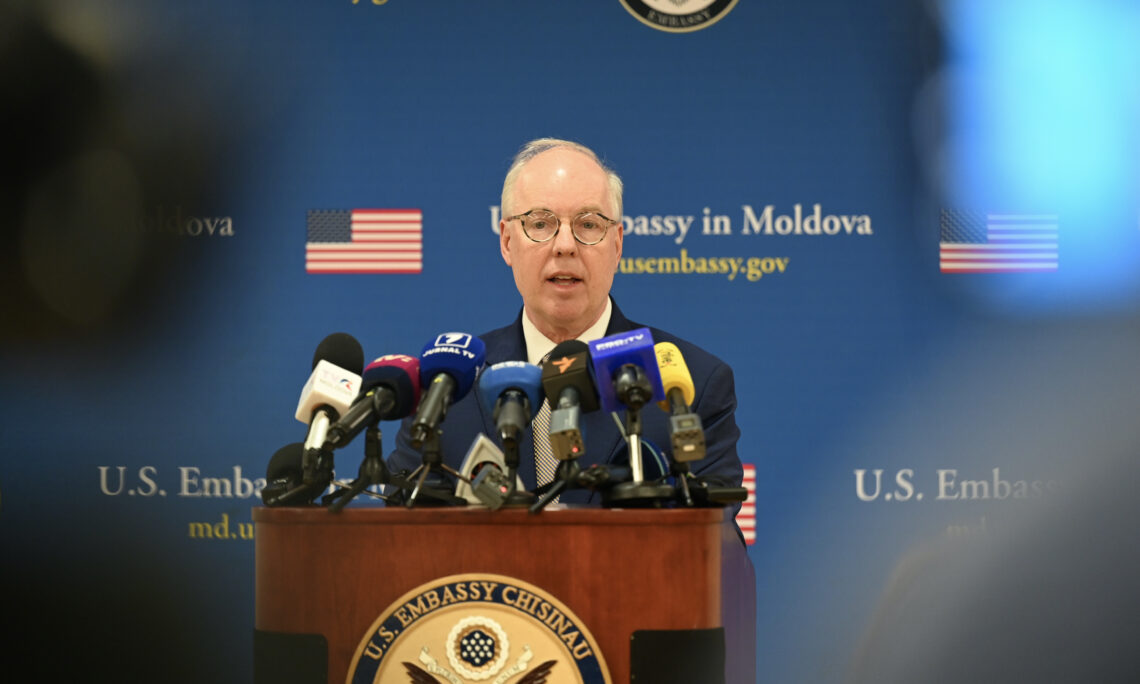 The Moldovan people have clearly voiced their demand for an end to the corruption and malign foreign influence that have plagued this country for too long.

They want a country with equal opportunity for all, where public funds are used to benefit the people, rather than a corrupt circle of oligarchs.

They want a government that makes decisions in the best interests of its people, not at the direction of hostile foreign powers.

The United States has long worked to support this vision, providing financial, technical, and advisory support to critical judicial and rule of law reforms.  And we have clearly and consistently respected Moldova’s constitutional neutrality and its sovereign right to choose its own path.

Today, I am announcing a new step forward in the fight against impunity for corruption, and in our support to the Moldovan people in their struggle for a fairer, more prosperous, and more secure future that is free from the undue influence of foreign governments pursuing their own interests.

Just moments ago, the United States Department of Treasury announced sanctions against two Moldovan oligarchs – Vladimir Plahotniuc and Ilan Shor – and several entities and individuals associated with them for actions related to systemic corruption and Kremlin-linked election interference.

Adding them to the Specially Designated Nationals and Blocked Persons List means that, effective immediately, all property and interests in property of Mr. Plahotniuc and Mr. Shor that are in the United States or in the possession or control of U.S. persons are blocked and must be reported to the Department of Treasury’s Office of Foreign Assets Control.

In addition to the sanctions against these notorious oligarchs, the United States took action today to counter the Government of the Russian Federation’s persistent malign influence campaigns by imposing sanctions on other individuals and entities associated with Russia-backed influence efforts in the Republic of Moldova.

These sanctions prohibit all transactions by U.S. persons – and any other transactions within or transiting the United States – that involve any property or interests in property of the sanctioned individuals.

Mr. Plahotniuc, Mr. Shor, and the other individuals designated tonight will also be ineligible to enter the United States as immigrants or non-immigrants.  Mr. Plahotniuc has already been subject to similar travel restrictions since 2020.

The United States government is implementing these sanctions under two different legal authorities.  Mr. Plahotniuc is designated under Executive Order 13818, which builds on and implements the Global Magnitsky Act, for his extensive role in corruption in Moldova.

Mr. Plahotniuc’s bribery of law enforcement to maintain loyalty and secure greater control in 2018 reflects his longstanding efforts to capture and corrupt Moldova’s judicial and law enforcement institutions, while using his wealth and political influence to undermine political rivals, bribe elected officials and erode and the rule of law in the country.

Mr. Shor, his wife Sara Shor, the Shor Party, and several Russian nationals and entities are designated under Executive Order Number 14024, which blocks property for persons involved in harmful foreign activities of the government of the Russian Federation.

Specifically, these individuals and entities are found to have interfered in the Moldovan electoral process on behalf of the government of the Russian Federation, including working to support Russian interests in Moldova’s Parliament in 2021, and working with Russia and other oligarchs to foment unrest in Moldova as recently as June 2022.

The Russian nationals sanctioned in today’s action participated in a wide-ranging effort to undermine rule of law and influence elections and domestic politics in Moldova to further Russia’s interests.

Moldova is an independent country which deserves, like all sovereign nations, the right to chart its own course.  The actions of these sanctioned Russian nationals demonstrate that Russia has never respected Moldova’s right to make its own decisions.

Today we publicly identify these Russian nationals in order to impose sanctions on them and in order to ensure that anyone who might consider similar tactics in Moldova going forward understands that they will face consequences.

Each of these designations is rooted in an extensive and thorough process and the highest evidentiary standards.

You, the Moldovan public, do not need me to tell you the extent of the corruption Mr. Plahotniuc and Mr. Shor have engaged in.  You have lived through the years of state capture, an eroded justice system, distorted elections and stolen votes in Parliament, and bags of cash changing hands.  Tonight’s announcement is the latest in a series of actions the United States has taken to help root out the scourge of corruption in Moldova.

Today the United States demonstrates once again that we stand shoulder to shoulder with you in combatting corruption and protecting your hard-won democracy.