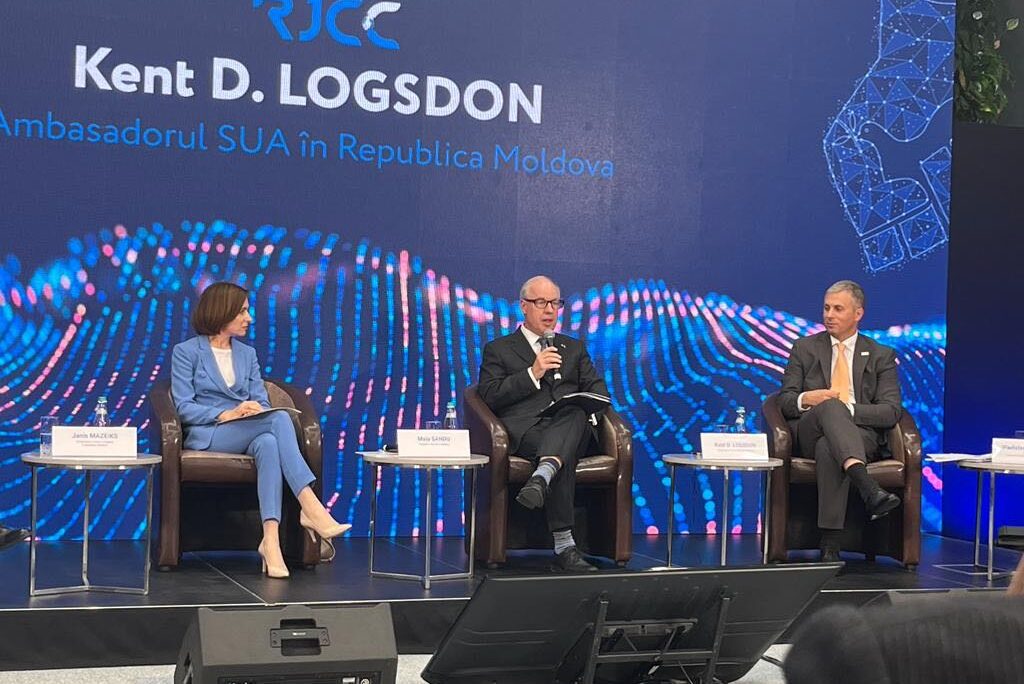 I would like to begin by recognizing and applauding President Sandu’s leadership over many years on justice and anticorruption reform, and the government under the leadership of Prime Minister Gavrilita for advancing these reforms.  This Forum – organized by the Legal Resources Center of Moldova and sponsored by the U.S. Embassy – was first organized during the 2019 government of then-Prime Minister Sandu, when the issues of justice reform and anticorruption for the first time in many, many years were seriously addressed in Moldova.

That commitment to justice reforms is also reflected in Moldova’s leadership in the Summit for Democracy.

But today is not meant just for congratulations. We also need to recognize the many challenges still ahead – for Moldova’s leadership, for the state officials working in the justice and law enforcement sectors, for Parliament, for Moldova’s international partners, and for Moldova’s civil society and citizens.  All of us have a role to play.  We will need to continue to work together to accomplish the difficult and long-term work of advancing justice every day and accomplishing real justice reform.

This will not be easy.  Pursuing judicial reform and making progress on anti-corruption is like building the plane while we are flying it. – In this historic effort, we are trying to vet and reform the judges and prosecutors and the oversight bodies that remain responsible for administering justice throughout the process.

These challenges are even more difficult because of the continued destabilizing efforts of fugitive oligarchs who are using corrupt systems for their personal gain and to stop this reform process.  This is to the detriment of the people who are trying to operate according to the law.  And their efforts are inhibiting inclusive economic growth and of the rule-of-law in Moldova.

These challenges are even more pronounced since February 24, when Russia launched its unprovoked war in Ukraine, forcing the Republic of Moldova to contend with an unprecedented influx of refugees, disruptions to the economy, and other uncertainties.  And we saw how this small country with a big heart responded.  However, as Secretary Blinken reminded us during his March visit to Chisinau, it is critical that these challenges not result in a loss of momentum on the reform agenda.

The Moldovan people have waited long enough.  They deserve strong, independent courts and prosecutors that treat all citizens equally under the law.  And they deserve elected officials committed to eliminating corruption in all its forms.  Real justice and anti-corruption reforms are impossible without strong, independent institutions.  This means strengthening and adequately staffing independent corruption-fighting institutions like the National Anticorruption Center, the National Integrity Authority, and the Anticorruption Prosecution Office.  It also means implementing transparent and streamlined government decision-making and procurement processes to reduce opportunities for graft.  And – as we are doing here today – it means recognizing, empowering, and applauding anti-corruption reformers in government, civil society, and the media to provide oversight and deter misconduct.

An independent judiciary is the cornerstone of this effort.  Independent courts ensure that society is ruled by laws.  The law must be applied consistently and each citizen must be able to approach the court with the expectation of a fair and impartial hearing.  Only when the courts are truly independent from outside influence can they act as a real check on the abuse of power.

Unfortunately, previous non-transparent investigations into the “Billion Dollar” bank fraud, the “Russian Laundromat,” and other high-profile criminal activity have severely undermined public confidence in the judicial system. It is not surprising the courts and prosecutors have long been among the least trusted institutions and officials in Moldova.

Today, however, we have a dedicated, reform-minded team now leading Moldova.  The United States Government – including through the Bureau for International Narcotics and Law Enforcement (or INL) and USAID here in Chisinau; FBI agents based out of the LEGAT office in Bucharest; and other agencies based in Washington, D.C. – will continue to partner with you in your efforts to combat corruption.  And we are fortunate to work with excellent international partners – especially our colleagues from the EU – in promoting these reforms.

The U.S. government is devoting substantial resources to many of the Moldovan government’s critical reform projects, including the extraordinary “vetting” of judges and prosecutors, and the provision of extensive training, technical assistance, and resource support to key justice sector, law enforcement and anticorruption institutions, and the courts.  We are also working to use every tool we have as the U.S. government to hold accountable those who have stolen from the Moldovan taxpayers and undermined Moldova’s rule-of-law.

Moldova’s dedicated work on justice reform and anticorruption has not gone unnoticed, and I fully expect that headlines about Moldova around the world will continue to laud important new justice and anticorruption reform accomplishments.  And with time, Moldovans everywhere will be able to trust their justice system to deliver real accountability and fairness for everyone.  The United States looks forward to seeing the difference that can be made in Moldova; to supporting all of you in those efforts; and to coordinating with Moldova’s other international partners to maximize the impact of our collective support.

I am firmly convinced this forum today can contribute to accelerating progress toward real, impactful, and lasting reform in Moldova.  Thank you very much.