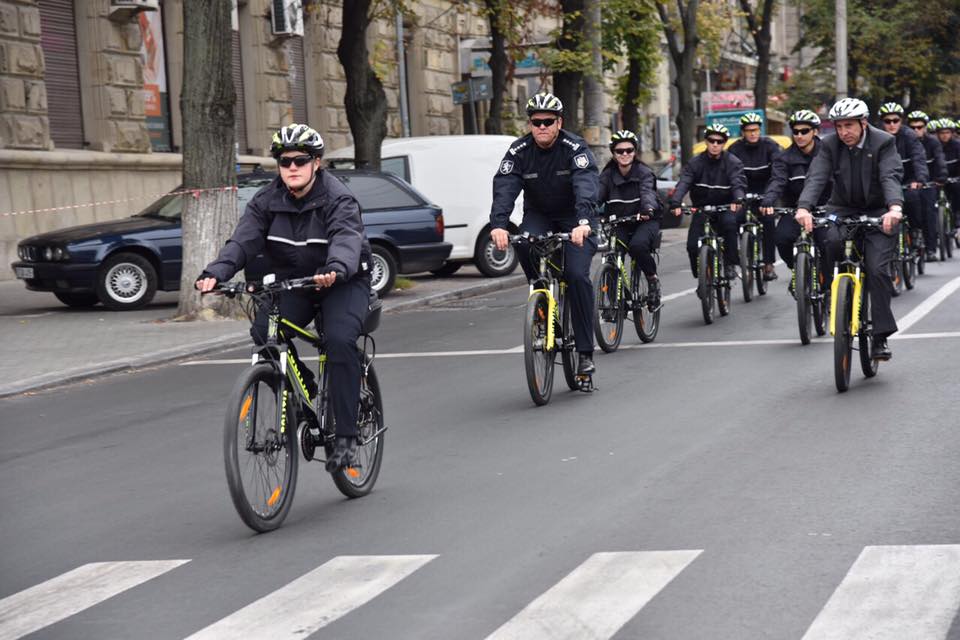 On Saturday, October 7 Ambassador James Pettit participated in the launch ceremony of the first ever Moldovan police bicycle patrol unit.  The event began at the Embassy, where the National Chief of Police Alexandru Pinzari and Ambassador Pettit led a bicycle ride of the entire 20-officer bicycle patrol unit through the city streets of Chisinau to the main Cathedral in the central square of the capital.

In his speech Ambassador Pettit emphasised the close cooperation between the United States Embassy’s International Narcotics and Law Enforcement Section (INL) and General Police Inspectorate in Moldova and encouraged to continue the robust efforts to implement the four-year Police Development Strategy.

The U.S. Embassy has been working closely with the General Police Inspectorate on police reform here in Moldova.  One of the most important aspects of this work has been the transition of the police from a control and response law enforcement agency to one that emphasizes modern community policing techniques.

The purpose of community policing is to serve the public in true partnership that reflects the needs of its citizens.  As part of our work on this effort, we have conducted many training events and organized equipment donation projects throughout Moldova to implement community policing.  This bicycle patrol initiative is a great example of our strong partnership with the Ministry of Interior and the General Police Inspectorate.  In fact, the idea for the new unit came directly from Chief Pinzari, and we are delighted and proud that he first developed the idea while visiting our country, where he observed bicycle patrol officers in San Diego, California during the International Association of Chiefs of Police conference last year.

United States Embassy’s International Narcotics and Law Enforcement Section (INL) in Moldova was thrilled to assist the General Police Inspectorate with the establishment of the new bicycle patrol unit, including the donation of the bicycles themselves as well as the uniforms and safety equipment.  Then, the GPI selected twenty of the finest police officers in Chisinau, who first received training in the principles of community policing.  They were then specially trained according to international standards by American instructors who came to Chisinau specifically for this project.  I must add that the training program was demanding and rigorous, and the police officers worked hard to earn their certificates in the August heat.

This bicycle patrol unit represents a tangible change in the way the police will interact with the Moldovan people.  Bicycle patrols are cost effective; they enhance the capacity of police to enforce laws; they are environmentally friendly; and they dramatically increase the number of interactions between the police and the general public.  I trust that the new unit will distinguish itself and help to positively influence the public perception of the police force.  Today is National Wine Day and a great opportunity for Moldovans to see you in action in Chisinau!