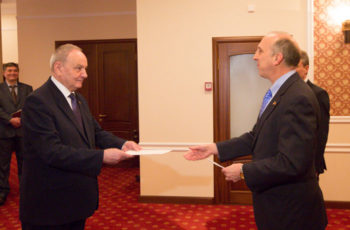 U.S. Ambassador James D. Pettit presented his credentials to President Nicolae Timofti this morning in an official ceremony.  During his introduction with President Timofti, Ambassador Pettit expressed his pleasure to be in Moldova and said, “I would like to assure you that I will make every effort to strengthen the bilateral relationship between our countries and to support Moldova on its democratic and European path.”

He received a B.A. in International Studies and Russian from Iowa State University, and a M.A. in National Strategic Studies from the National War College.  He speaks Russian, Spanish, German, Mandarin Chinese, and recently studied Romanian for several months prior to his arrival in Moldova.  He is married and has two daughters.