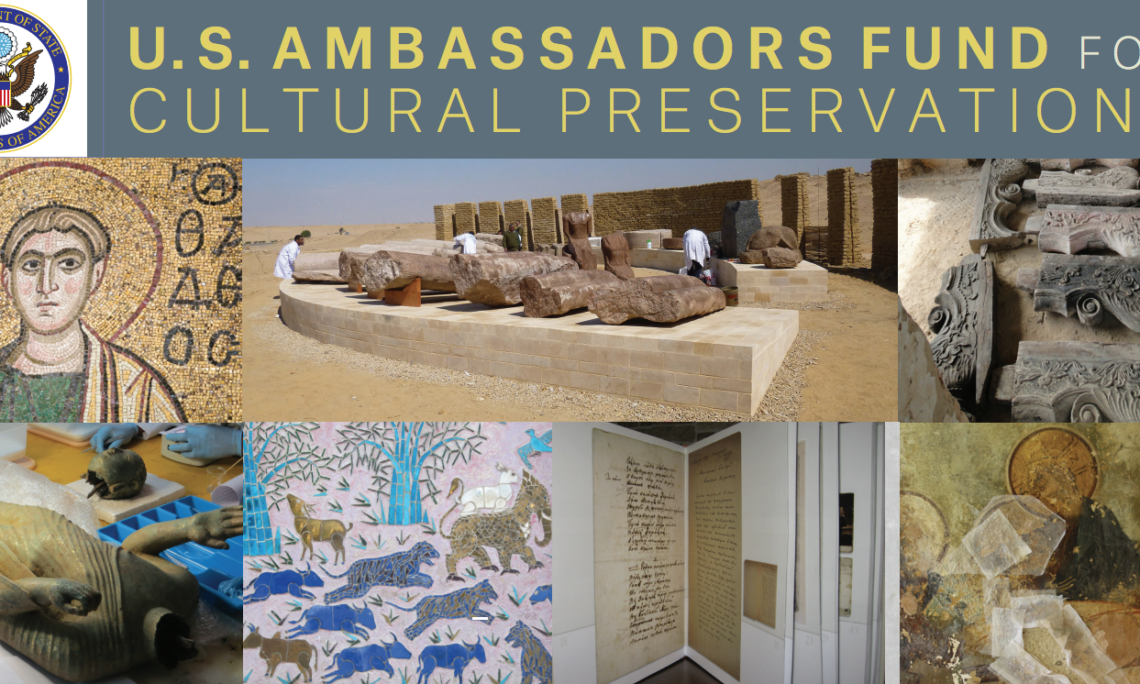 The Ambassadors Fund for Cultural Preservation is the only cultural preservation program of the U.S. government that provides direct small grant support to heritage preservation in other countries. Through the Ambassadors Fund for Cultural Preservation, the U.S. Department of State helps eligible countries around the world preserve cultural heritage such as the restoration of historic buildings, assessment and conservation of museum collections, archaeological site preservation, documentation of vanishing traditional craft techniques, improved storage conditions for archives and manuscripts, and documentation of indigenous languages.

Since 2001 the U.S. Government has awarded cultural preservation grants to thirteen projects in Moldova through the Ambassadors Fund for Cultural Preservation. For more information please visit the program site at http://eca.state.gov/cultural-heritage-center/ambassadors-fund-cultural-preservation.

The U.S. Embassy in Chisinau is pleased to announce a call for proposals for the 2022 Grants Competition of the U.S. Ambassadors Fund for Cultural Preservation (AFCP).

The U.S. Ambassadors Fund was established by the U.S. Congress in 2001 to help countries preserve their cultural heritage and to demonstrate U.S. respect for different cultures around the world. AFCP projects strengthen civil society, encourage good governance, and promote political and economic stability around the world. The minimum amount of an award is $10,000, and the maximum is $500,000.

The AFCP has provided over 1.5 million dollars in grants to fund projects throughout Moldova over the last two decades. These grants have helped to record traditional forms of Moldovan music and dance, build a Visitors Center and preserve the medieval bath complex in Orhei Vechi, preserve the Treasury Room Objects at the National History Museum of Moldova, preserve old and rare books at the National Library of Moldova, preserve Gagauz folklore, customs and rituals, and currently is helping to preserve the Assumption of the Virgin Mary Church in Causeni.

The application process involves two rounds: In Round 1, eligible project implementers will submit a concept note focused on objectives that may be accomplished through the proposed project. In Round 2 invited embassies will submit a full application, due April 18, 2022.

The deadline for submitting electronically Round 1 concept notes in English to the U.S. Embassy in Chisinau is 5:30 pm on Monday, December 13, 2021. The Round 1 results will be announced on or around January 15, 2022.

On September 27 the U.S. Embassy announced a new and final grant of $290,000 for the preservation of the Assumption of the Virgin Mary Church Ambassadors Fund for Cultural Preservation project. In 2016, 2017, and 2019 the AFCP awarded $150,000, $200,000, and $380,000 grants respectively for preventive conservation, stabilization, and restoration, of one of the oldest medieval churches in the area. Up until now the grantee, the Archaeological Research Center of the Republic of Moldova, conducted archaeological excavations, built a new sewage and electricity system, replaced the church masonry, replaced the roof with a sturdy and historically appropriate brick one, built an aeration system around the church foundation, and consolidated and preserved the frescos in church’s altar and naos areas. In 2021/2022 the interior frescos consolidation and conservation in naos and pre-naos areas will continue and the project is expected to be finalized in October, 2022. The total project cost is estimated at $1.6 million.

The Assumption of the Virgin Mary church is among the oldest churches in Moldova. It is the only church in Moldova that has all of its interior walls covered with frescoes. The frescoes were painted by Wallachian artists in 1763. Wallachia was a historical and geographical region of Romania that existed from the 15th to 19th centuries. These particular frescoes are considered the only remaining example of the Byzantine-Romanian style paintings of the 18th century in the easternmost part of Europe.