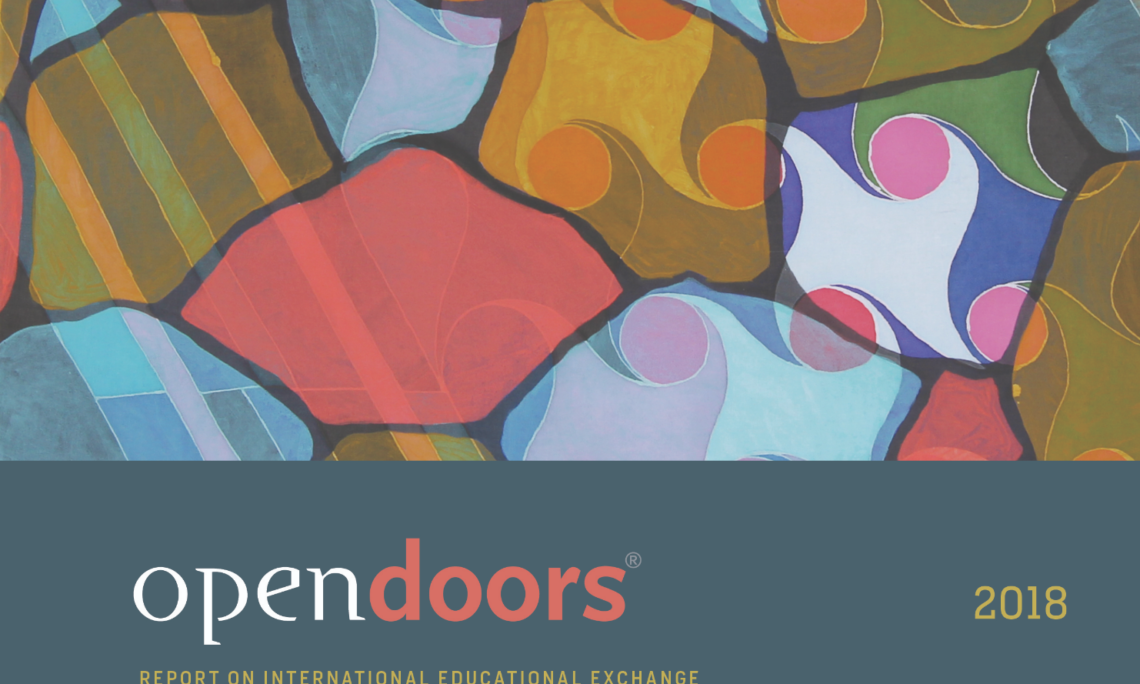 WASHINGTON, D.C., November 13, 2018 – The number of international students in the United States surpassed one million for the third consecutive year, increasing by 1.5 percent to reach a new high of 1,094,792 million, according to the 2018 Open Doors Report on International Educational Exchange.

Open Doors 2018, released today by the Institute of International Education (IIE) and the U.S. Department of State’s Bureau of Educational and Cultural Affairs (ECA), highlights the impact of international education on the U.S. higher education sector, examining the numbers and profile of international students in the United States in 2017/18 and of U.S. students receiving academic credit for study abroad in 2016/17.

“International students studying alongside Americans are a tremendous asset to the United States,” said Marie Royce, Assistant Secretary of State for Educational and Cultural Affairs. “We need to develop leaders in all fields who can take on our toughest challenges. We need people who can find solutions that keep us secure and make us more prosperous. We want to send a message that international education makes us stronger as a country.”

As for U.S. students, study abroad numbers grew by 2.3 percent to 332,727 Americans studying abroad for academic credit at their home institutions in 2016/17. Approximately one in 10 U.S. students study abroad during their undergraduate career.

In addition, Open Doors 2018 shows that the profile of U.S. students going abroad continues to diversify. The number of students who identify as racial or ethnic minorities who studied abroad in 2016/2017 was 29.2 percent. In 2005/06, racial and ethnic minorities accounted for only 17 percent of the study abroad population.

“Expanding access to opportunity through international education helps us build stronger ties across the world,” said Dr. Allan E. Goodman, president and CEO of IIE. “International students have more choices than ever before on where to pursue higher education. The dedication of American colleges and universities to students’ academic, professional, and personal success is one of the main factors in our international competitiveness.”

While overall numbers of international students increased, new student enrollments fell by 6.6 percent in 2017/18, corroborating findings from the 2017 fall enrollment survey and continuing a slowing or downward trend first observed in the 2015/16 academic year. Current gains in the total number of international students are due primarily to increased participation in the Optional Practical Training (OPT) program, which allows international students to practice their skills in the United States for up to 12 months during or after they complete their academic programs, or up to 36 months for graduate students in STEM fields. OPT participation grew by 15.8 percent in 2017/18. Among enrolled students, drops were seen primarily at the graduate and non-degree levels.

Open Doors is published by the Institute of International Education (IIE), which has conducted an annual statistical survey on international students in the United States since its founding in 1919 and in partnership with the U.S. Department of State’s Bureau of Educational and Cultural Affairs (ECA) since 1972. Open Doors also reports on the

number of international scholars at U.S. universities and international students enrolled in pre-academic Intensive English Programs. Further details on the Open Doors 2018 surveys and their findings are on the Open Doors website. The full 100+ page report will be available in early 2019 and can be ordered from IIE Books. For more data, infographics and resources visit iie.org/opendoors.

IIE works to build more peaceful and equitable societies by advancing scholarship, building economies and promoting access to opportunity. As a not-for-profit with 18 offices and affiliates worldwide, IIE collaborates with a range of corporate, government and foundation partners across the globe to design and manage scholarship, study abroad, workforce training and leadership development programs. For more information, please visit www.iie.org.

About the U.S. Department of State Bureau of Educational and Cultural Affairs The Bureau of Educational and Cultural Affairs (ECA) builds relations between the people of the United States and the people of other countries through academic, cultural, sports, professional and private exchanges, as well as public-private partnerships and mentoring programs. These exchange programs improve foreign relations and strengthen the national security of the United States, support U.S. international leadership, and provide a broad range of domestic benefits by helping break down barriers that often divide us. ECA sponsors the flagship Fulbright Program, the Benjamin A. Gilman Scholarships for U.S. undergraduates with financial need, the Critical Language Scholarship Program in support of U.S. foreign language study abroad, and the EducationUSA network of over 400 advising centers worldwide, which provides information to students around the globe who wish to study in the United States. Visit eca.state.gov.