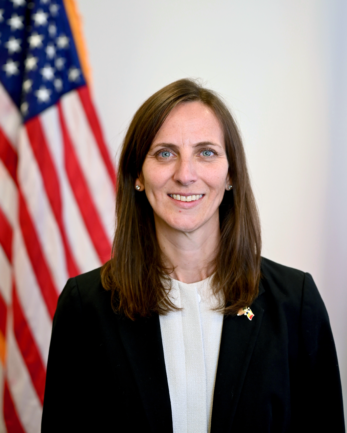 Laura Hruby is the Deputy Chief of Mission of the United States Embassy in Chisinau and a career Foreign Service Officer since 2002. Prior to this assignment, she represented the United States as the Deputy Chief of Mission and Charge d’Affaires, a.i., in Cotonou, and served at the U.S. Embassies in Moscow, Islamabad, and Baku and the Consulate General in Istanbul. In Washington, she has served in the Bureaus of Consular and African Affairs.

Laura is a distinguished graduate of the National Defense University, where she received a Master of Science degree in Strategic Security Studies. She also holds a Bachelor of Science from Georgetown University’s Walsh School of Foreign Service. Laura speaks Russian and French, and is studying Romanian. A native of Hudson, Ohio, she is joined in Chisinau by her husband and their two sons.