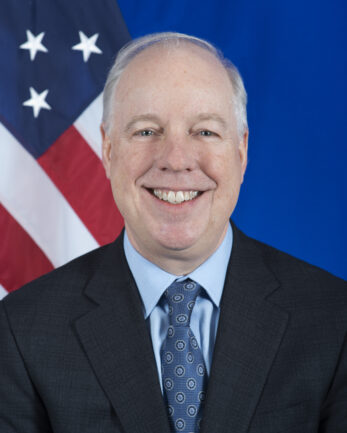 Ambassador Logsdon is the United States Ambassador to the Republic of Moldova and is a career member of the Senior Foreign Service.  He most recently served as the Chief of Staff to the Under Secretary for Economic Growth, Energy, and the Environment and prior to that was Principal Deputy Assistant Secretary of State in the Bureau of Energy Resources.  He was also the Deputy Chief of Mission at the U.S. Embassy in Berlin, Germany, serving as Chargé d’Affaires, a.i. from January 2017 to May 2018.

Prior to Berlin, Ambassador Logsdon was the Executive Assistant to the Deputy Secretary of State for Management and Resources, and also served as Deputy Executive Secretary of the State Department.  His previous positions include Director of the Operations Center, Director of the Office of Russian Affairs, and Deputy Chief of Mission in Tbilisi, Georgia.  He has also served as Political Counselor in Kyiv, Ukraine; and held a variety of positions in Bangkok, Thailand; Almaty, Kazakhstan; Islamabad, Pakistan; and Stuttgart, Germany.  Ambassador Logsdon speaks Russian, Ukrainian, Thai, and German.  He is studying Romanian.