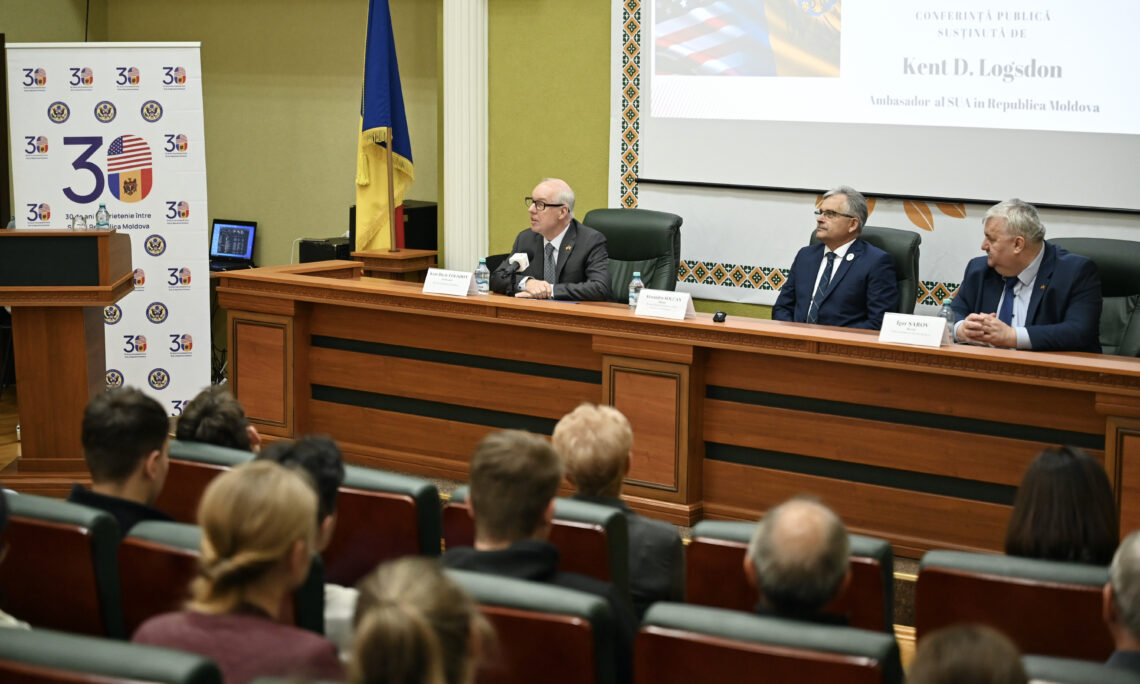 Good morning. Thank you Rector Sharov for the invitation and to you and Dean Solcan for the kind words of introduction.

As Secretary of State Blinken said when he visited Moldova recently: “We’re grateful to Moldova for 30 years of friendship, and we look forward to the next 30.”

And it is the next 30 years of our partnership that I want to talk about today.  I see it as my responsibility as Ambassador to lay the foundation for our continued strong cooperation this year, next year, and 30 years into the future.

That is why I’m here to talk to you today.  I spend plenty of time with politicians, other Ambassadors, and civil society leaders.  And don’t get me wrong: I enjoy those relationships immensely, and we get a lot done together.

But today I want to talk about the future of the relationship between our two countries.  Where are we going? How will we get there? What challenges will we face along the way? And how can we continue to build on the legacy of the first 30 years of our friendship? In short, what do the next 30 years look like?

As I look out at the room today, I see the people who will play a key role over these next 30 years.

You will be responsible for continuing to achieve Moldova’s democratic aspirations.

You will be responsible for advancing Moldova’s progress on its chosen European path.

You will be responsible for nurturing and maintaining Moldova’s warm relations with neighbors and partners all around the globe.

So what better place to talk about our shared future than right here with you?

And I want to hear from you:  how can we better plan for the next 30 years when we seem to be dealing with immediate crisis after crisis?

And when I’m finished, I hope that we can have an open and candid conversation about the challenges that you see and the opportunities that are available to us if we work together.

I arrived in Moldova in February.  In my more than 30 years as a diplomat, I’ve served in Ukraine, Georgia, Germany, Thailand, Kazakhstan, and Pakistan.  Along the way, I’ve seen countries on the rise, and I’ve seen countries that weren’t quite sure where to go next.

Of all the places that I’ve served, I believe that the Republic of Moldova has a unique opportunity to embrace its chosen European trajectory, raise the living standards, and improve the lives of all Moldovans.

When President Biden spoke about the power of democracy at the U.N. General Assembly, he highlighted that unique opportunity to the world.

He celebrated the fact that this country has chosen leaders with a mandate to combat corruption, restore faith in broken institutions, and deliver an economy that works for all Moldovans.  Moldova made a choice to break with the past and embrace a future where the government serves the people, not just the corrupt interests of a few self-serving individuals.

The United States is proud to partner with you as you walk that path.  We know that it is a path that leads to a bright future for both of our countries over the next 30 years.

Of course, Russia’s brutal invasion of Ukraine has caused many to worry about Moldova’s future.  The Kremlin’s blatant disregard for international law and its attempts to redraw the map of Europe at the point of a gun have caused great concern here and around the world.

Let me say here what I have said many times before: The United States does not see evidence that Russia intends to extend its war into Moldova.  We continue to monitor the situation closely and to share information freely with our partners here.

As President Biden has said, Putin will lose this war.  I know that it is difficult to see that today, as the fighting rages on.  But we know that authoritarian leaders who invade their neighbors are on the wrong side of history.  Russia’s invasion of Ukraine is intolerable to freedom-loving people everywhere, and it will not succeed.

The invasion has created many challenges in Moldova.  The United States is proud to stand with Moldova as it confronts those challenges, including through our commitment of more than $130 million in assistance.

The war has also provided the world an opportunity to see that this small country has a big heart.  In the early days of the war, I was so proud to watch as Moldovans opened their homes and their hearts to neighbors who were forced to flee.  Even now, this country hosts more refugees per capita than any other in Europe.  And you’re doing so not in vast tent cities or crowded refugee centers.  Many of those refugees are staying in homes with host families, eating home-cooked meals and enjoying Moldova’s famed hospitality.

Your country’s response to the largest refugee crisis in Europe since World War II is the best evidence that I have seen that Moldova can tackle any challenge that it faces, now and for the next 30 years.

The international community’s assistance to Moldova is the clearest evidence that I’ve seen that the world stands with Moldova as it goes about tackling those challenges today, and in the decades to come.

Despite the burdens created by Putin’s war in Ukraine, we cannot lose focus on our continued work to build our relationship.

I see three key priorities for our relationship moving forward.

First, the United States will work with Moldova to consolidate the democratic gains that it has made in recent years and strengthen Moldova’s democratic institutions as you pursue closer integration with the countries and institutions of Europe.

Second, the United States will work with the government and the people of Moldova to build an economy that works for all and one that provides Moldovans with the resources to move this country on its continued path of development.

And, third and finally, the United States will stand shoulder-to-shoulder with Moldova as it strengthens its security architecture to face the challenges of today and tomorrow.

For too long, oligarchs and corrupt elites treated this country like their personal property.  They stole not just from their contemporaries, but from future generations – from your generation.

But rather than succumb to despair – to the idea that this is just the way it is and the way it always will be – Moldovans have made their voices heard, loud and clear: “No more corruption, once and for all.”  And we have heard your voice, and we are here to support you.

The justice system must be cleaned up.  Without confidence that the laws will be justly and equally applied, the economy cannot develop, the political system cannot mature, and fundamental human rights cannot be guaranteed.

That is the first task this government is taking on, and the United States is providing crucial support so Moldova can make sure only judges and prosecutors with the highest level of integrity are able to be part of the system.

These people make decisions every day that alter the lives of regular citizens – they need to be the best and brightest.

Weeding out corruption does not stop there.  Illicit financing in the political system is a major challenge, as is protecting against money laundering, and making government decisions at all levels transparent and efficient.

In all these areas, and many more, the United States is standing shoulder-to-shoulder with Moldova.  In 30 years, will corruption be completely gone?  No, and that is not the case anywhere.  But I am hopeful that – well before then – corruption will no longer be hold back Moldova’s development and its European aspirations.

This Administration has also made a priority of advancing the rights of minorities and vulnerable communities – both in the United States, where we have a lot of work to do, and abroad.

In just the past few months, Moldova has ratified the Istanbul Convention on combatting domestic violence, improved the legal framework for persons with disabilities, and advanced legislation to prevent hate crimes.  We will work with Moldova to make sure these are not just promises made on paper, but promises kept in reality.

With improved rule of law and protection of fundamental rights comes greater economic opportunity, which is essential to ensuring that promising young people like you stay in this country and build its future.

One way to do so is to grow bilateral trade and investment between Moldova and the United States.  Increased trade with the United States provides more choices for Moldovan and American consumers – a win/win!

U.S. companies bring with them innovative practices, higher salaries, and promote corporate social responsibility that benefits both employees and the community.

We will continue to work with the American Chamber of Commerce and our government partners to implement legislation that would improve Moldova’s business climate, so that companies feel safe investing here.

We will also continue our programming for Moldova’s educational institutions – starting with the youngest ages – to ensure that the country educates the best workforce skilled for the “in demand” jobs of the future.

I know that increased energy prices have stymied economic development and affected numerous small and medium-sized businesses in Moldova.  As one of Europe’s least energy secure countries, Moldova is incredibly vulnerable.  Access to affordable energy sources is an economic, climate, and national security issue for Moldova.

I pledge that helping Moldova diversify energy sources and strengthen its energy security is one of my absolute top priorities, and not just mine.  My colleagues in Washington are also determined to help.

In the short term, we are working to strengthen Moldova’s energy institutions so that they can purchase electricity on an open market.

In the medium and long term, our programming will help Moldova integrate into the European gas and electricity markets.  We will also help Moldova improve energy efficiency in commercial, government, and private buildings.

Finally, in 30 years I hope that we will see a Moldova that is secure within its internationally recognized borders.  We respect Moldova’s constitutional neutrality.  Our security assistance is focused on ensuring that Moldova has professional and capable security and military forces to protect the population – whether from natural disasters, terrorism, or other threats.

We already see Moldova emerging as an exporter of security – not just a recipient of aid.  Moldovan soldiers are abroad in peacekeeping missions, preventing conflicts, providing medical assistance, and removing dangerous landmines so civilians can live freely and safely.  We will keep up these efforts in the years to come.

The people of our two countries share a belief in the power of democracy and the promise of the future.

As Ambassador I am proud of the role that I and my colleagues play in building the relationship between our two countries.

But in my more than 30 years as a diplomat, I have learned that the real work of strengthening a relationship depends on the people.

You and your counterparts in the United States are responsible for the enduring power of our friendship.

You will be responsible for the next 30 years of our partnership. Let’s get to work!